Missed the first race planned, gutted as it would have set me up for the next block of training before starting the Triathlon season. 5-6 weeks without any descent running made my mind up long before the race and even with other races going on and pb’s being run everywhere I know when I’m not ready to line up on the start. Early preparations for the season now in full swing, still tweaking the bike set up but now I’m comfortable with the saddle I’m just going to change the Aero bar set up a little closer to what I had before, still got my bike for sale which everyone wants for the way it looks rather than the fact its built for speed.

Weather is getting better!

Six weeks now to the first race means stepping the speed up a bit in the pool, the bike has been stepped up as I have been covering an indoor session which has been very high intensity stuff, when I say high I mean 220% efforts last week 10secs on 10secs off for a minute with a big chunk of rest, I don’t tend to do anything like that regularly but it definitely hurt and woke the legs up!My running will still have to be built up slowly, I would love to just go for broke on some 1k efforts but my calves won’t take it yet, going in to a sprint race first I just want to know I have some speed to be more comfortable than last year. I was planning some tt’s in April but with my other commitments that is going to have be turned in to my own mock tt efforts on the turbo or outside.

That’s pretty much where I am now, Just about to buy a race suit and get it marked up, I am swim, bike and running at the moment, no more setbacks and I should be ready to race in May. Flights for Kona booked, accommodation sorted, that’s one expensive race!

That leads me on to a topic that’s been on my mind lately, although I have raced pro I have never been thrown kit that I didn’t need, when it’s time to change that kit it funds the next lot of kit, unless your podium in most races the money and kit doesn’t come flying In so I don’t have the luxury of owning anything and everything. I am lucky now that since starting Ironman in 2011 I have had some support and I try as much as possible to make my sport pay for itself with coaching, prize money or sponsorship.

This year I have some new sponsors as well as the ones that have helped in the passed. Mikes bikes have helped with the Giant trinity ambassador deal and another business has promised help with settling the deal. I still race on Zipp wheels which are sponsored by Aermech Ltd and that’s why they don’t come with the Ceepo when it’s sold. Big brums has been supporting me from the start and continue to help with race fees which is a massive help, Eddie Rocks has been helping the last 2 years and is happy to help again. New this year is Griffiths construction who will be helping towards expenses for Hawaii for the World championships. Leelavadee Thai massage therapy helps me with my aches and pains and I have one more in the pipeline which is why I haven’t marked a race suit up yet. Racing at the top end doesn’t come cheap.

I have had a few requests to help other up and coming athletes deal with the problems, decisions I have had to go through, if possible I can give advice but with regards kit I have to many people closer to me that would benefit from something rather than helping people miles away who are going through the process of trying to compete with parents with deep pockets. I raced on crap kit for the first 2 years and wasn’t noticed then I bought a good wetsuit and came out over two minutes ahead of some top pros in Britain on Stuart Hayes feet, didn’t stay there on the bike mind, I finally got a good road bike with some tri bars and manged to hold on to the guy that won the age group overall race in Kona last year Dan plews, I got a nice second place in Bala, going back along time now.

Kit makes a big difference to your overall result but the way kids are judged in trials is down to swim and run at the moment as the bike doesn’t matter as much, races is when the bike becomes important, not so much in drafting races as I could get away with a cheaper bike with descent wheels, but non drafting races comes down to getting the most for your money, you want a light Aero bike, helmet, wheels, race suit, wetsuit, shoes, at the top end they make the difference if you’ve got the genetics. Bargains are out there, deals to be made and research to be done. 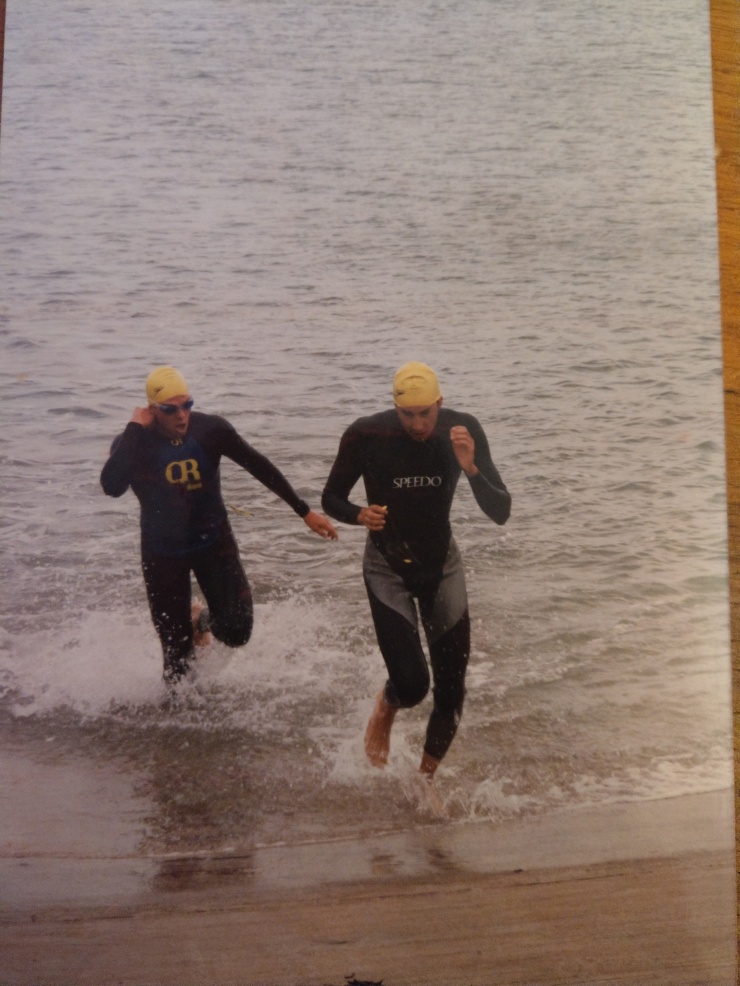 I don’t want to get in to the world of club politics which I keep coming across, if it affects the person staying in the sport in the long term then it’s just not worth getting involved with. I would love to be part of some of the clubs I have had the pleasure working with but with my lifestyle I can’t commit to it, the perks sometimes arn’t worth the time you have put in and everything else suffers, racing, family and you. I have to do all of my training myself as I don’t have time to sit around in a coffee shop mid ride or hanging around for people who have missed a turn etc when I want to get home and see my family, a constant juggling act where there is no time for non productive sessions, my time is precious.

Keep it casual, don’t burn your bridges, your inner demon is for racing so try and enjoy the rest, the only pressure we should have to deal with is the pressure we put on ourselves any club or team worth being part of knows that.